Hello, this is GT. This article is Okinawa travel report part 2.

Please see below for previous contents.

【GT’s Okinawa Travel Report Part 1】Haneda Airport, where even those who don’t like airplanes can enjoy

The plane took off from Haneda Airport and arrived safely at Naha Airport. I borrowed a rental car from the airport and moved to the hotel. After a brief break and organizing my luggage, I headed to the Himeyuri Tower.

Okinawa became the battlefield during the Pacific War. Female students and staff served as nurses at the Okinawa Army Hospital. And many people were sacrificed. This is where the monument is located.

There is a Himeyuri Peace Museum in the grounds where the Himeyuri tower is located. The museum has detailed explanations and materials on how the battle was at that time and how people were sacrificed. (English explanations are also there.) 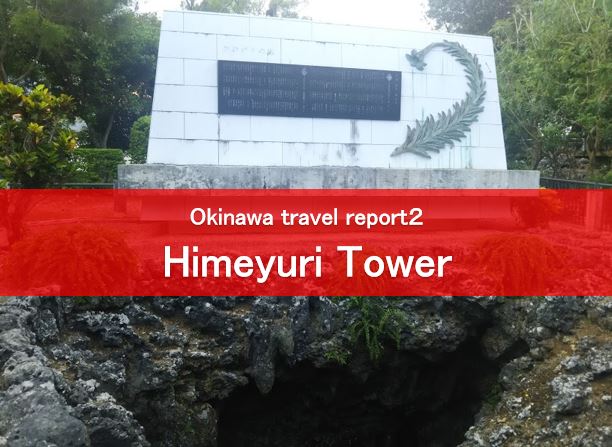 I drove south from the side of Itoman City Hall by car and headed east along National Highway 331. Below is Street View, 50 meters before the Himeyuri Tower.

Go 50m and pass the intersection “Ihara” at the Himeyuri Tower. Probably about 30m after that, come to the pho2to below. Turn right into the free parking lot.

The other one did not stop! The car on the right is the car I was on.

Because it was around 4pm on weekdays, it was empty. I think that some people will come on Sunday.

The parking lot in the sightseeing spot is free. Okinawa good place ♪

The basic information of Himeyuri Tower is as follows. In fact, there is a Himeyuri tower in the site of the Peace Memorial Museum.

I entered the site

There was a guide signboard immediately on the site. The Himeyuri Tower is just ahead, and if you go further to the left, you will find the Peace Memorial Museum.

When I walked a little, there was a memorial monument.

The memorial is engraved with the names of the victims.

And there is a hole under it. This is a hole like a shelter called “gama”. The Okinawa Army Hospital Third Surgery was placed in a hole to prevent mortars. Since there was a battle with Okinawa, wounded soldiers were carried and the female students who served were also nursed here. And many people were sacrificed.

Inside the museum, the flow of the Pacific War and the details of the Battle of Okinawa were explained. Here are two things that I deeply felt.

Impression 1: About not surrendering

The decision of the Okinawa Army was do-or-die resistance to delay the mainland decisive battle.  Retreat battle were held against the American army with overwhelming power.  The American army attacked a lot during the process of pushing up the front line, so Japanese and civilians evacuated into the hole.  Going out of the hole at that time was like suicide.

Japan at that time could not prevent the March 1945 Tokyo air raid. Even in the mainland decisive battle, Japan was clearly going to lose.

If the Okinawan army surrendered without fighting, there were fewer victims.

But that’s what I can say now. People who want to give their lives for the country can’t make the decision to surrender easily. I can’t blame anyone who chose do-or-die resistance with giving their life for the country.  I am sad to see many victims, and I am sorry for the death.

Impression 2: The soldier yells at the female students and drives them away from the hole

The following is the most memorable story.

There were female students and a soldier in a hole.  They were supposed to give up their lives when American soldiers attacked and there was nothing to do.  The soldier was saying that the soldier took the life of a female student, and then the soldier also dies.

When the last time approached, somehow the soldier wielded the Japanese sword and shouted at the female students to get out of the hole.  Many American soldiers had guns outside the hole, but they went out of their hole. And they surrendered to American soldiers.

Then the explosion sounded inside. The soldier died using grenades.

In my imagination, the soldier lastly encouraged female students to surrender. But because he was saying that he would give his life for the country, he couldn’t have said to surrender. The soldier wielded Japanese swords and shouted, so students had to go out of the hole.  Then they could save their lives.

For soldiers at that time, living with shame would have been more difficult than dying.

Getting out of the hole is also a suicide act. Driving a weak student out of a hole is a self-serving and selfish act. If he does that, he will be disgraced. Knowing that, he drove the students out of the hole. He was unable to surrender after being disgraced with shame.

Even if he died, he wanted to help only the lives of the students! That thought became a reality and the students did not die.

I carefully read the materials in the museum until 5:30 pm, the closing time. I think it was a good study.

I cried about the story of the soldiers expelling students from the hole. Soldier, your last decision has saved the students from dying. You are great. I ’m deeply respectful.

In this way, I had a meaningful time because I felt a lot and thought about peace. When you come to Okinawa, please stop by the Himeyuri Tower.

After that, I decided to board a rental car and see Shuri Castle at the end of the day. Shuri Castle is located around the center of Okinawa. I went to Shuri Castle.

Later in the evening, the road was jammed.

There may be many people using cars to commute in Okinawa. The road on the way to Himeyuri tower was empty, but it was very congested from around 6pm. When you drive in Okinawa, be sure to schedule a traffic jam at dusk.

As a result, I abandoned going to see Shuri Castle and headed to the hotel.

This is the end of this article. How was it? It will continue to the next. See you!

Continue to the following page

Nice to meet you. I’m GT, a foolish Japanese man. Well, Korea has a...

Hello, I am GT. I like video games. Since I attacked in the cla...

Hello, I'm GT. I will introduce Kyoda, Servie Area on the way to no...