Hello, this is GT. I have traveled to Okinawa, so I will divide it into several reports.

This time is about Haneda Airport.

I wil organize the trip reports so that everyone can enjoy it. Also, I will try to post useful information as much as possible so that it can be helpful when you travel to Okinawa.

The following article summarizes what happens when a return flight is canceled due to a typhoon and how to deal with it. Please see if you plan to use an airplane in Japan.
“Special vacant seat waiting” experience in Japan 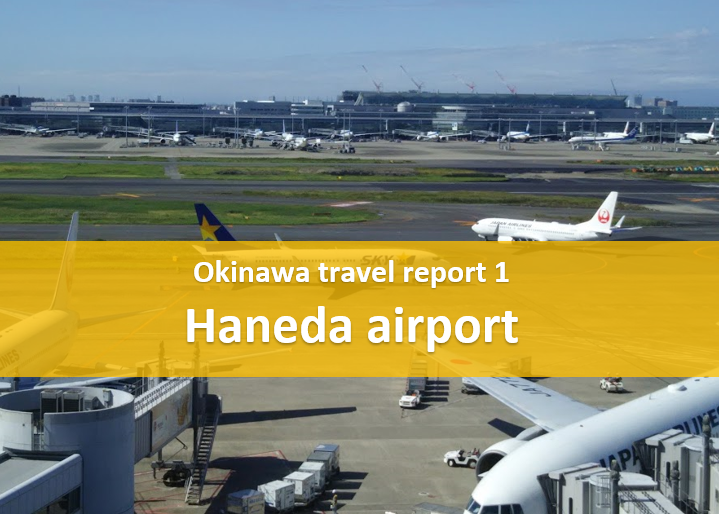 Arrived at Haneda Airport in the morning

I was supposed to take a JAL flight from Haneda Airport to Naha on Wednesday, October 9th. I arrived at the airport about two hours before that because it was 10:50 am.

When you looked at the airport map, I saw that there was an observation deck. Let’s go there!

To the observation deck

I took the elevator and aimed for the 6th floor. 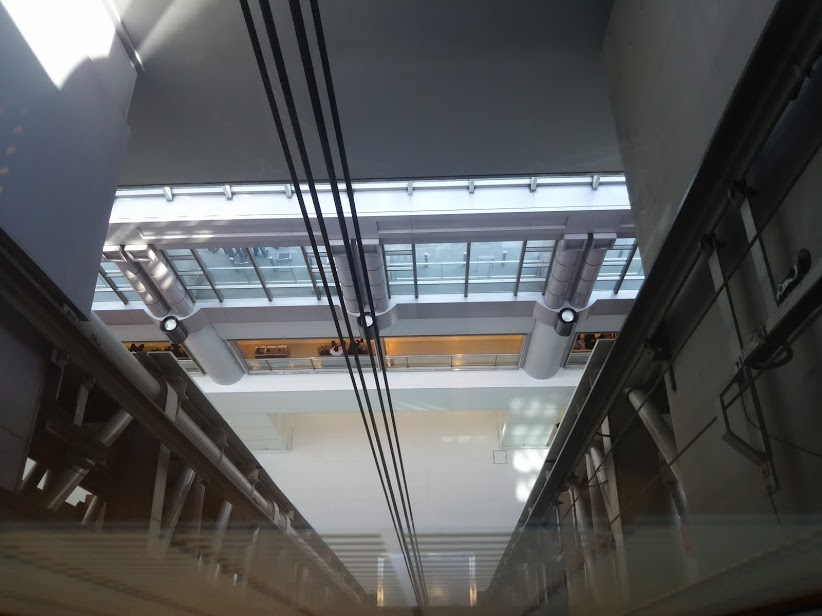 I came to quite a height. Get off the elevator on the 6th floor and head to the observation deck. 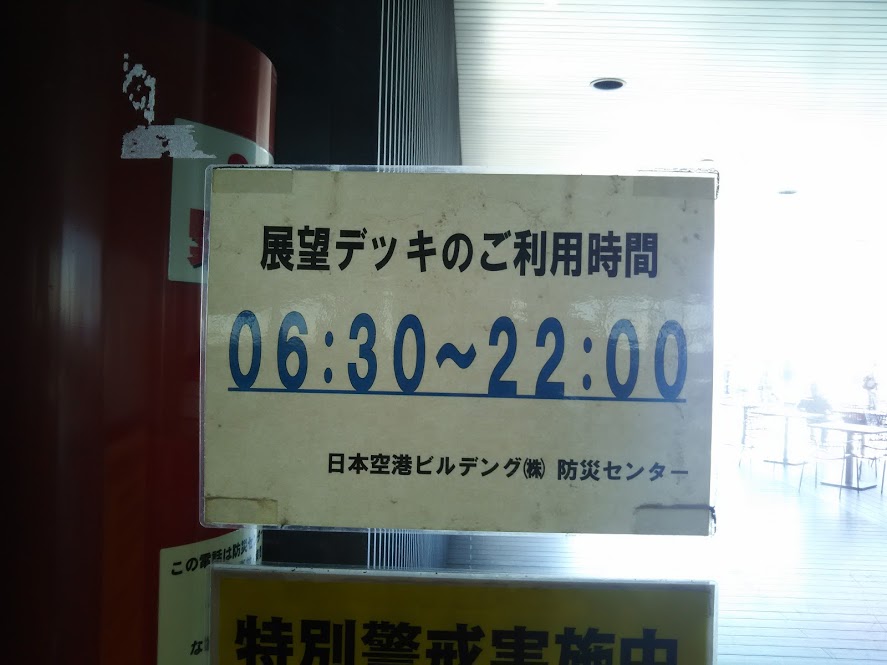 A chair and a desk are visible right outside. I am in Terminal 1, but the observation deck here is until 10:00. Please be careful if you want to see the night view. 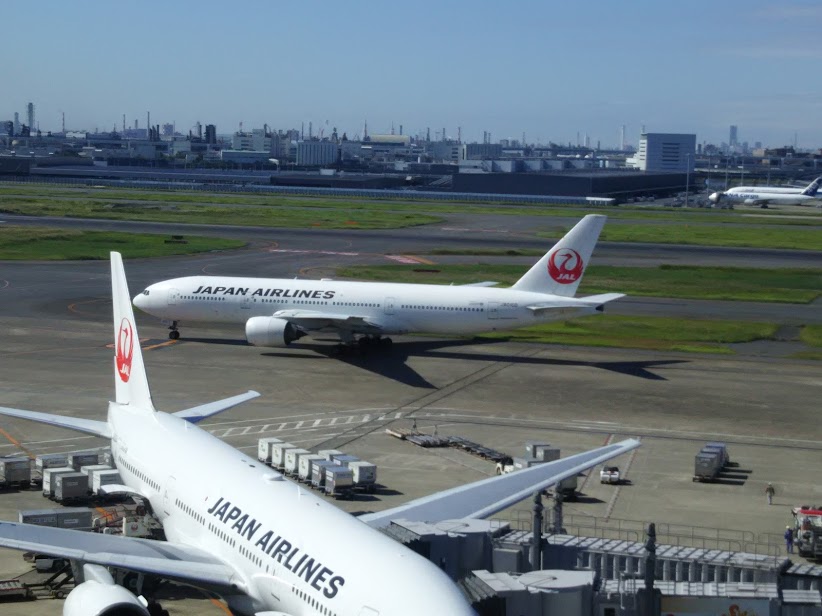 When I opened the door, I saw a jet. It was spectacular to see a big figure nearby!

The sun was strong because it was nice weather. There was a glare, but the jet plane that went slowly to take off and the view clearly visible far away were also good. 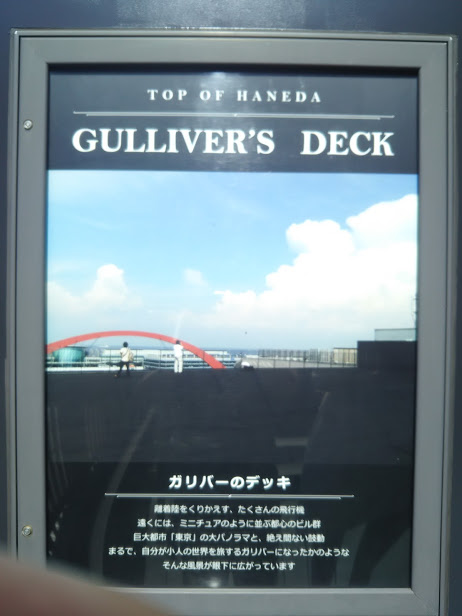 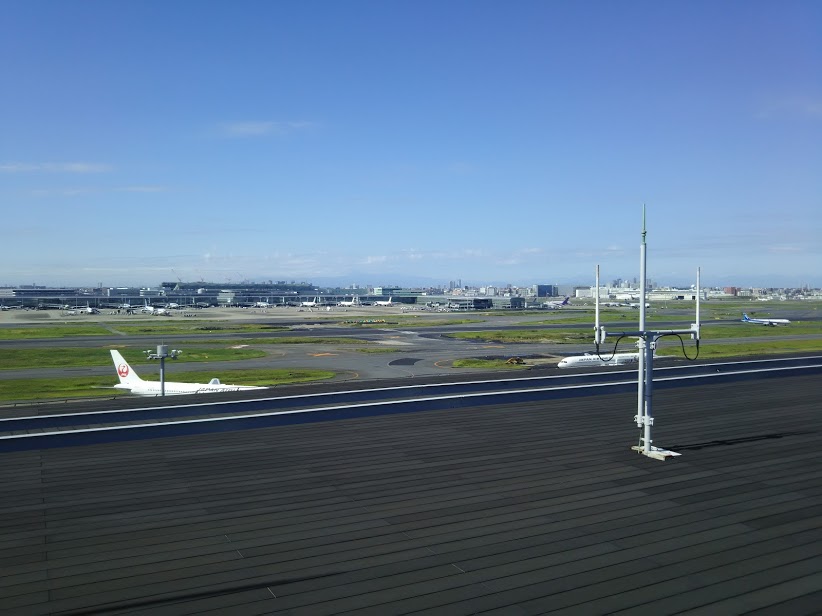 I came to the roof of Terminal 1. The top photo is the international passenger terminal on the southwest side. I can see well far away and feel good. The wind was also comfortable. 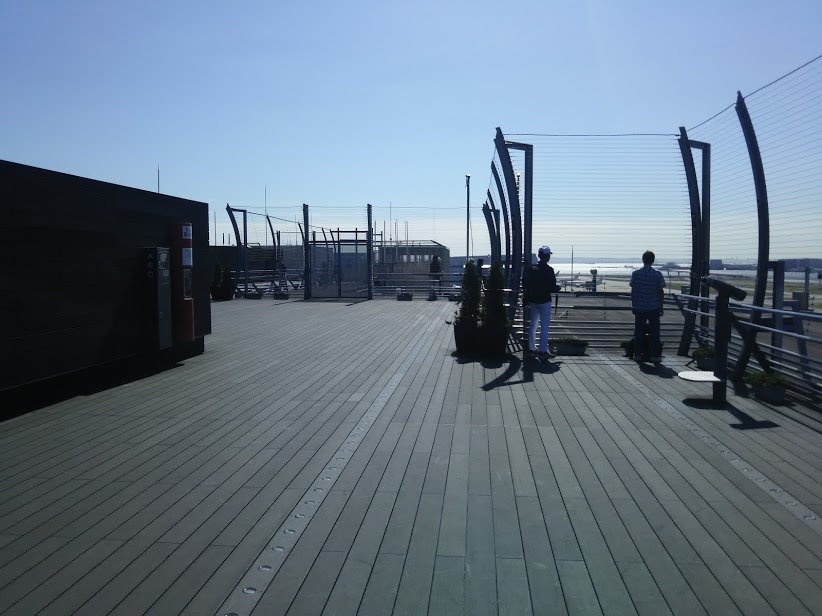 It is a picture facing the southeast side. The airplane leaving Terminal 1 heads southeast, then turns northwest to accelerate and take off. 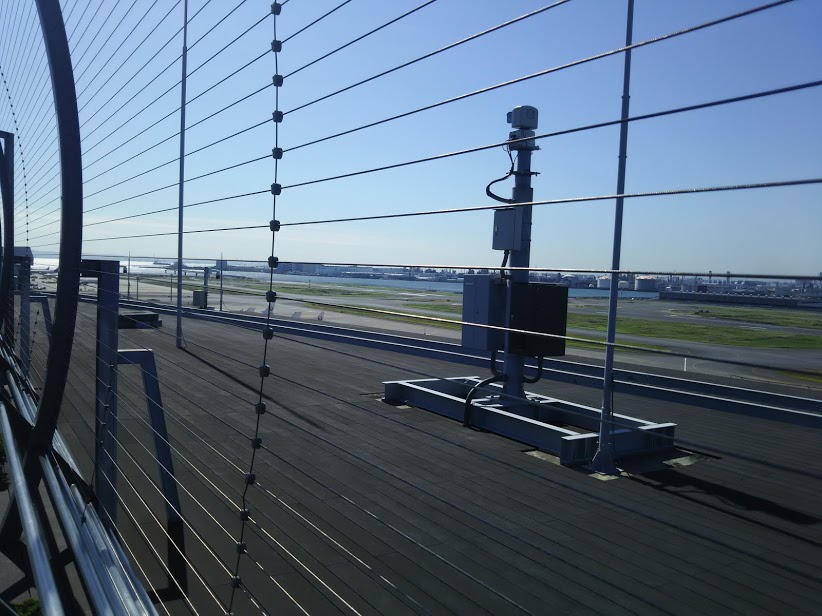 This is a photo in the southeast direction. There is something like a net, so you can’t get out of here. When I looked at this one, I saw a landing jet. I could not see the plane taking off from Terminal 1. In terms of location, if you want to see a take-off aircraft, go to the International Terminal or Terminal 2. 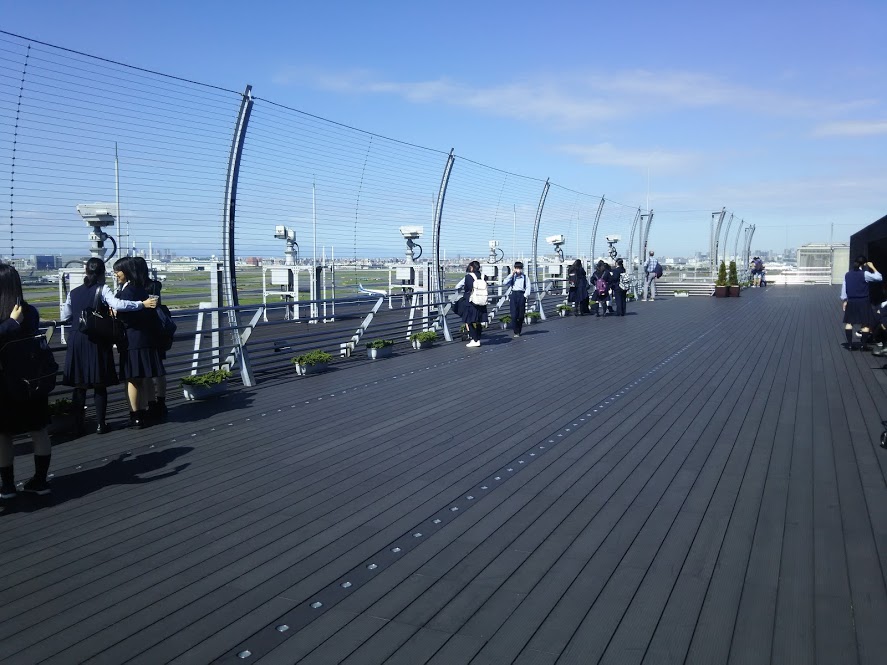 On this day, there were school trip students. Everyone was pleased with the good scenery. Exciting when thinking about future trips ♪

The location of Haneda Airport is as follows.

There are three Haneda Airport terminals, and from the east side are Terminal 2, Terminal 1, and International Terminal. When using an international flight, the international terminal is used, but for domestic flights, the terminal will differ depending on which airline is used.

The highlight is the international Terminal

Many of the places to enjoy are in the international terminal. Here are some typical examples.

【Fun at the international terminal】

Flight simulator：A machine that flies an airplane on the 5th floor in a pseudo space. You can fly a jet on various courses from beginner to advanced.（Haneda Airport International Terminal Portal Site : TIAT Sky Road）

Planetarium Starry Cafe：Located on the 5th floor, you can enjoy the planetarium while drinking and eating coffee and snacks.（PLANETARIUM Starry Cafe）

Edo ko-ji：This section reproduces the streets of Edo on the 4th floor. Enjoy a walk in the Edo period. There are also restaurants where you can enjoy meals such as edomae sushi and yakitori.（Edo ko-ji）

Observation deck: It is open 24 hours a day though the observation deck in Terminal 1 is open until 10pm. Especially at night, you can enjoy the night view. （International Terminal Observation Deck）

Have fun at the international terminal if you have time to fly. You can enjoy a holiday with your family without taking an airplane, or have a good time on a date!

Other notes: When going to the observation deck

When I came to Haneda, I aimed for the “observation deck” first. At that time, be careful not to get stuck. 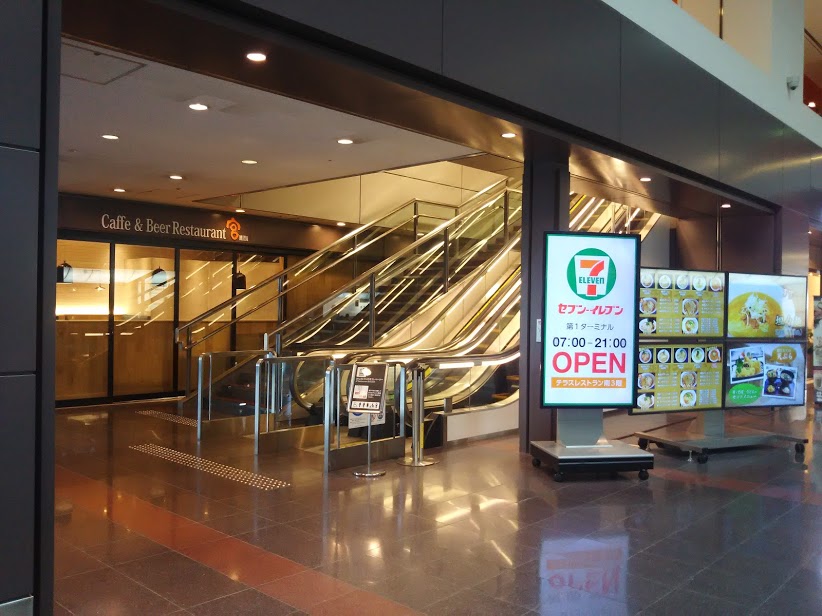 This is an escalator near the south end of Terminal 1, 2nd floor. I went up here. But I arrived at the restaurant on the upper floor.

There were no escalators or elevators beyond that, and it was a dead end. I came back to the starting point.

When you want to go to the observation deck, don’t go up from the escalator in the picture. Please refer to the following map. This is the one on the south end of the 2nd floor of Terminal 1. 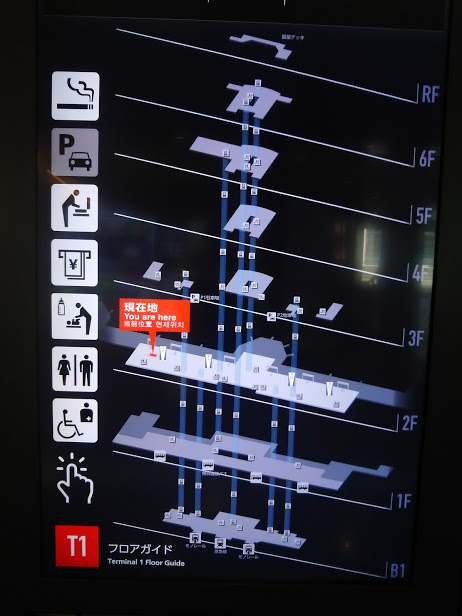 To go to the rooftop observation deck, you need to go to the center on the second floor. There are some elevators that can only go to the 3rd or 5th floor. As you can see, the elevator in the middle of the floor can reach the top floor. 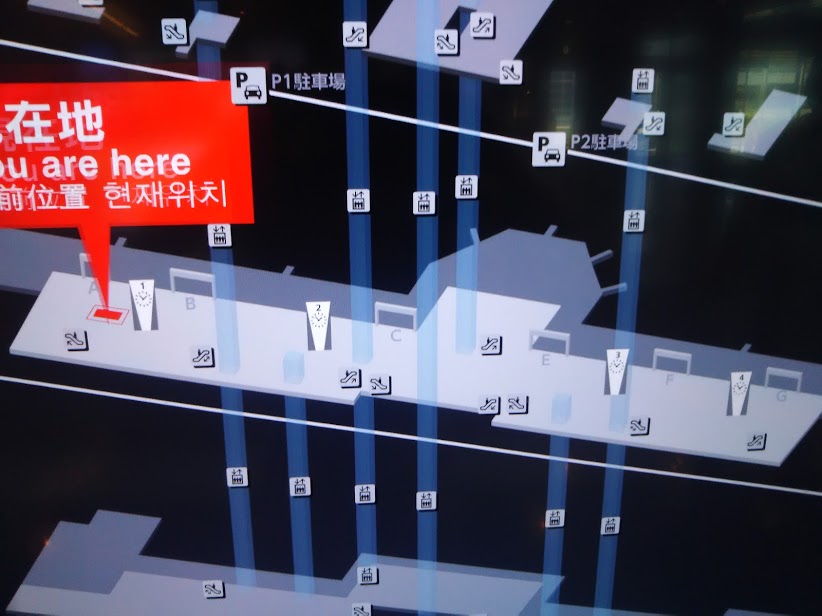 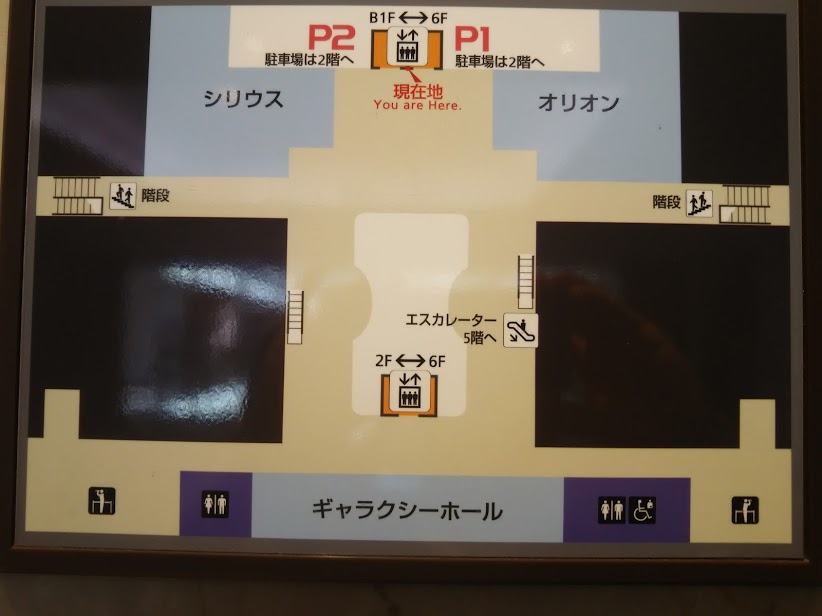 Other notes: Wi-Fi use on board

A lot of things have evolved recently. I was able to use Wi-Fi on the plane while the plane was flying. And if you wanted to watch a movie on board, you could watch your own smartphone or laptop.

If you want to watch a movie on your smartphone, you need to be careful. You need to download the in-flight entertainment app in advance.

There is one more thing.

When you connect to Wi-Fi, go to the JAL portal site (you can only connect to it) and make a “free internet connection” there. Otherwise, you can’t send emails or surf the internet.

It was such a GT that left Haneda safely after this. How was it? See you!

Continue to the following page

Hello, this is GT. This is Okinawa travel report part 4. I will report...

Nice to meet you. I’m GT, a foolish Japanese man. Well, Korea has a...

Hello, this is GT. This article is Okinawa travel report part 2. ...