Nice to meet you. I’m GT, a foolish Japanese man.

Well, Korea has announced that it has decided to destroy GSOMIA, which is a military information comprehensive protection agreement with Japan. The destruction of this was honestly unexpected.

There is a problem between Japan and Korea, but GSOMIA is important for both Japan and South Korea. Even if there is a conflict in history, national security is the most important thing. I thought that history and national defense would be separated and GSOMIA would be extended. But I was wrong.

So I wrote a reflection.

I will reflect on behalf of Japan. Korean people, I was completely misunderstood. I will change my mind from now on.   m(_ _)m

Now, let me explain how I thought in this way. This isn’t the only reflection, so you can read the following reflections later. Then here we go!^^ 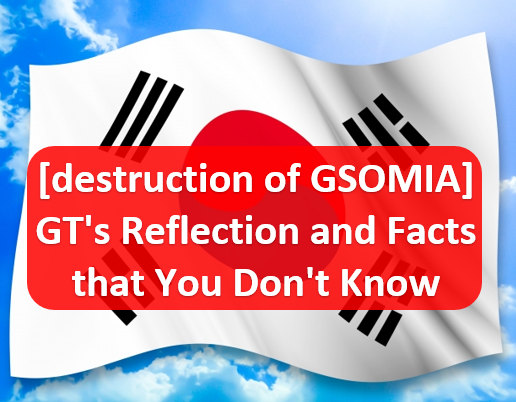 There are various problems, such as the dissolution of Reconciliation and Healing Foundation for comfort women and the radar irradiation of the Korean Forces against Japanese Self-Defense Forces.  Directly related to the destruction of this GSOMIA is Korea ’s compensation judgment for war time laborers from the Korean peninsula and trade measures that the Japanese government has excluded Korea from the export preferential country.

The compensation judgment issued by Korea is that Japanese companies should pay compensation to Koreans who are workers from the Korean Peninsula. Japan signed a Japan-Korea Claims Agreement with South Korea in 1965 to solve the labor compensation issue. And this is a settled problem because Japan paid the Korean government compensation for Korean workers.

The Korean government received compensation for the workers and confirmed that the compensation issue was resolved as a state-wide arrangement. Because the promise was broken, the ruling issued by Korea violates international law. The Japanese government has requested Korea to change the situation. South Korea has ignored the request for the establishment of an arbitration committee based on the Japan-Korea Claims Agreement. Therefore, it is not possible to talk between Japan and Korea.

Then, export control issues have emerged in Korea. There were 156 cases of illegal exports. I think this report is new to your memory. This is a threat to national security for both Japan and South Korea because the goods that could be transferred to the military were illegally exported from South Korea.

Quoted above is news reported in Japan. I will translate it into English and introduce it to you.

「According to the Chosun Ilbo on May 17, 2019, the number of illegal exports of Korean companies caught by the authorities from 2015 to March 2019 was 156, and the number of cases caught in 2015 was 41 in 2018. The number has increased to 31 in 2019. In September 2015 and March 2018, arms trade was conducted with North Korea, and the same raw material for the production of VX gas that was used for the assassination of Mr. Masao Kim was exported to Malaysia. For example, Korean experts point out that the possibility of going to North Korea via a third country cannot be ruled out.」

What do you think of this article? My opinion is that Korea must improve such a dangerous situation.

There are security concerns about South Korea’s export control system, so it is necessary to improve it. Japan tried to discuss this issue with Korea. However, Korea did not respond to consultations from Japan for three years.

It is common sense that nation’s security issues prevail over other issues. If the country is attacked or destroyed, we can’t have room to say what the economy should be like. We, Japanese company and Japanese government, can’t export military-replaceable goods that could pose a threat to Japan with security concerns.

As a result, the Japanese government has downgraded Korea from an export preferential country to a normal management country.

Korea then claimed that Japan had come up with economic retaliation against the ruling. Korea does not touch on the problems of Korea itself. Korea doesn’t think about preventing illegal exports, Korea doesn’t admit Korea’s own bad things and says Japan is bad. 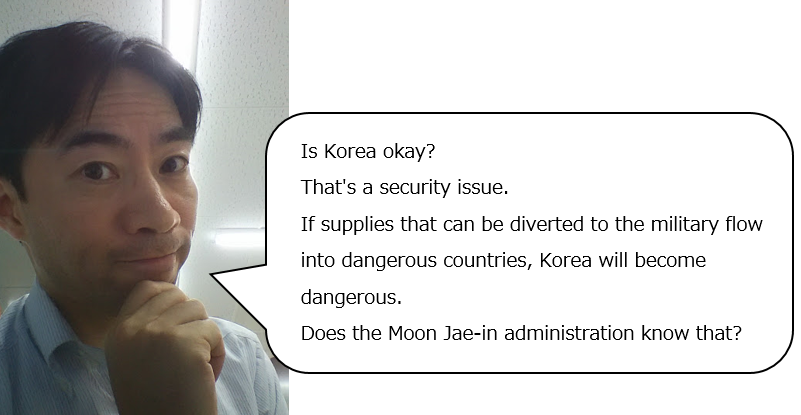 I reflected on the situation I have seen so far. Please read the reflection below.

I’ve changed my mind about export control.
Until now, Japan has been exporting goods as South Korea’s wishes as a country that can be trusted by a simple comprehensive examination. However, materials that can be diverted to military use are exported from Japan, whereas in South Korea they are not managed properly. Japan requested consultation to improve it, but Korea has ignored it.
So there is an only way to take.For the sake of Japanese safety, Korea should be downgraded from an export preferential country to a normal export control country. This is because South Korea does not correct South Korea’s inappropriate management, and Korea is only requesting Japan to withdraw export control measures.
Such a country is unreliable. So I’vd decided not to trust Korea.

Reason for decision of discard

After that, South Korea explained why it decided to abandon GSOMIA. The second deputy director of the National Security Office of Cheong Wa Dae, Mr. Kim, has made a statement, and the contents are as follows.

「Mr. Kim argued that the Korean side had asked for a dialogue aimed at a diplomatic solution to the judgment of the Grand Court (Supreme Court) over the issue of the war time laborers. And Mr. Kim insisted that “the Japanese side did not work seriously”. 」

What do you think of this attitude ?

JAPAN was trying to discuss the issue of war time laborers. South Korea replaces the story and accuses Japan.

Continuing, the members of the Moon Jae-in administration, the ruling party, made the following remarks:

「”The end of GSOMIA was essentially done by Japan. In essence, (The Korean government is )no different from accepting the destruction by Japan.”」

What the Korean government has decided is what Japan has decided! And Korea says that Japan is all bad.

Korean government
“Hi, everyone. Because we are not wise, we could not decide to destroy GSOMIA. So Korea let Japan make a decision to discard it. By the way, the US understands this, so there is nothing wrong with Korea, and Korea is not responsible for the problem. Japan is all bad.”

You can see that people who are not responsible for their decisions run the Korean administration, can’t you? And they are appealing to the world at their press conference about their irresponsibility.

What happened when we decided to destroy it

It’s true that the Moon Jae-in administration can’t keep up diplomacy. The Korean government would have done well in proceeding with the destruction.

The government said that there was no problem with the relationship with the United States. But actually it was different.The following actually happened.

「The blue house (Korean Presidential Office) said that it had talked with the United States and communicated before the destruction of the Korea-Japan Military Information Comprehensive Protection Agreement (GSOMIA) on the 23rd. The day before, they said, “We asked the US for understanding, and the US understood it.”」

Then, about that from the United States …

translation:”Lie. Not a fact”, completely denied.

Normally, the government does not say that other countries have lie.But because Korea is a liar country, the US called it lie. 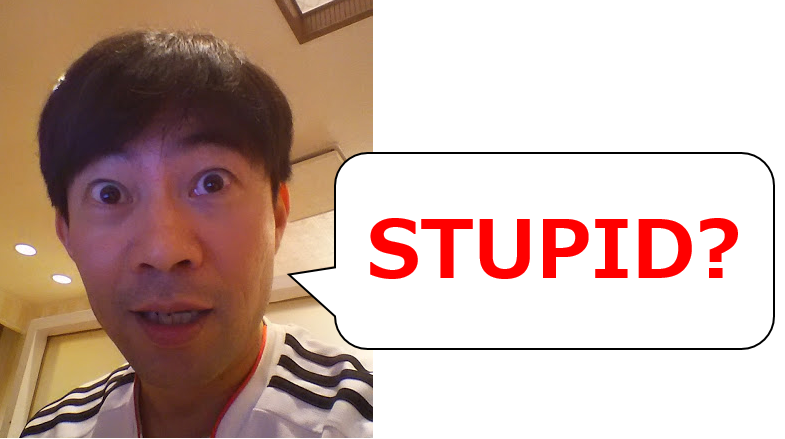 Furthermore, the US has been accused as follows.

“The US Department of State announced a publicly critical position regarding the end of the Korea-Japan Military Information Comprehensive Protection Agreement (GSOMIA). This time, the US Department mentioned the threat to the US military.

Morgan Otagas spokesman for the US Department of State said at 5:15 pm (local time) on the 25th in an official Twitter account, “We are deeply disappointed and concerned about the Korean government ’s decision to close GSOMIA. Protecting South Korea by the US military will be more complicated, and the risk of the US military may increase.”

Hey, what do Koreans think of this American blame? What about security in Korea?

Japan did not intend to destroy GSOMIA. National Security issues prevail over economic issues. This is common sense. There is actually a threat from North Korea, and it is necessary to make effective use of missile information in Japan and Korea.

「At the G7 summit, US President Trump was saying badly for two days that South Korea ’s President Moon Jae-in is “untrustworthy”. That was revealed by the FNN interview.

Mr. Trump criticized Moon Jae-in president on the first night of the G7 summit meeting held in France, while the leaders were discussing diplomatic security. “I can’t trust a person named Moon Jae-in”.

According to a government official, Mr. Trump further said, “Kim Jong-eun told me President Moon Jae-in is a person who lies. ”」 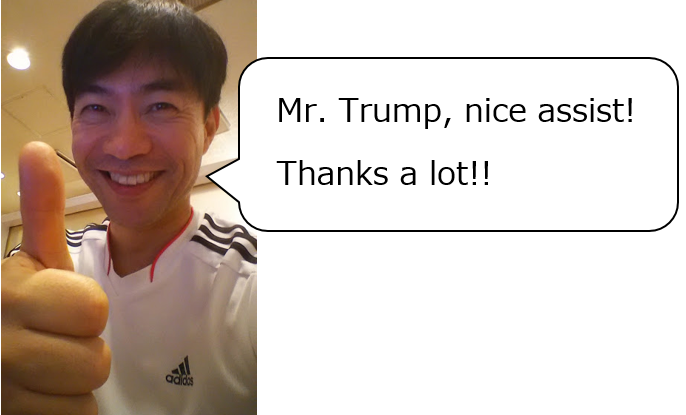 There are many Koreans who support the Munjain administration, and I think it’s amazing.That support is something I can’t do.

And the following remarks jumped out. I was very surprised. Really?

「South Korean prime minister Lee In-gyeong said GSOMIA will expire “from November 23” on the 26th at the Korean Parliament when the South Korean government has announced the destruction of the military information comprehensive protection agreement (GSOMIA) with Japan. And he said, “If Japan’s undue measures (such as strengthening export controls against Korea) revert, it would be desirable for the Korean government to reconsider GSOMIA.”」

Well, what does this mean?  Though Korea has decided to destroy it by itself, does Korea want to keep GSOMIA? Hmm…

Korea really wants to continue GSOMIA. But she’s so embarrassed that she can’t tell me to be a lover. That is so, isn’t it? I’m sorry, I didn’t notice it.
So I’ll tell her on behalf of Japan.

I never say that!

At first, Moon Jae-in was attracting great support from the public. Even now, half of the people support it, so I thought he was a good president who was doing something good for Korea, even though he does bad things against Japan.

But I am reflecting now. I was wrong.

He is from the student movement. So it’s great to criticize others. But when he politics as president, he is not good at finding a place to solve problems. Because he doesn’t see reality as a national leader, he doesn’t care about national interest. Moreover, the Moon Jae-in administration is a group that lies.

I will not trust such a government. And Japanese government shouldn’t deal with the Korean government.

Recently, news about Korea and Japan is often played. I’m worried every time.

In Korea, which is a trade addict, exports and imports have recently decreased. Moreover, the depreciation of the won is also progressing. Every time I see that news …

The meal is delicious ♪

GSOMIA destruction was decided. Of course, we will not conclude a currency swap agreement between Japan and South Korea even if a currency crisis is coming to Korea. So everyone in Korea, please keep saying that Japan is bad. The reward will be received in Korea.

That’s it. How was it? On behalf of Japan, GT gave a reflection. See you!

Hello, this is GT. This is Okinawa travel report part 4. I will report...

Hello, I am GT. I like video games. Since I attacked in the cla...