Hello. This is GT, a GoHo attacker.

The placement of enemy is as follows. 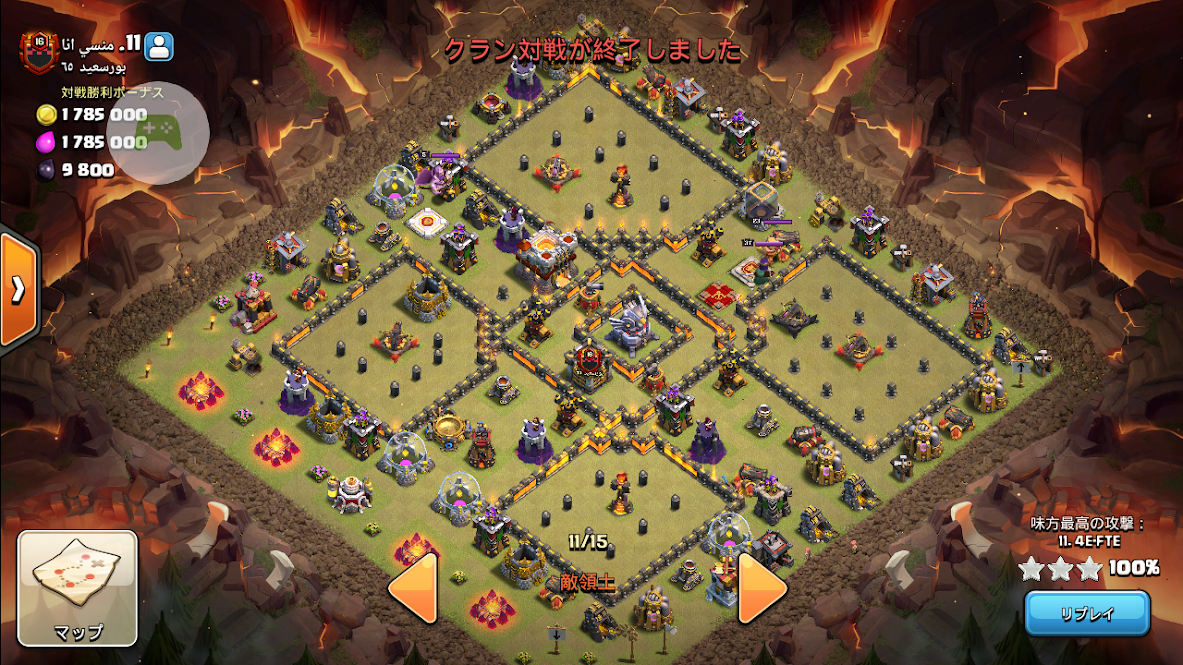 There is AQ on the right side of the town hall. Since it is essential to defeat AQ and reinforce treatment before Hogriders are introduced, the approaching units will be from around 2 o’clock.

This time I decided to attack with the following organization. 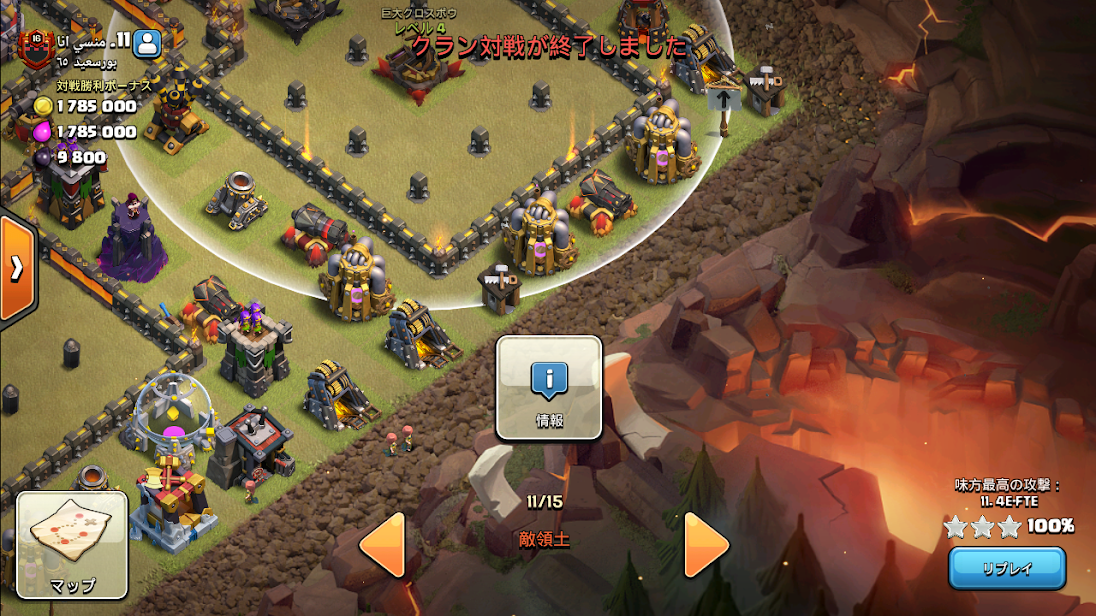 This is an enlarged image at 3 o’clock. The cannon in the center of the screen is within the attack range of the X-bow. If I use a minion, it seems to be able to attack from outside the range delicately. But subtle.

The bomb tower on the cannon is also in the way, so I prepared two balloons and decided to attack each one. 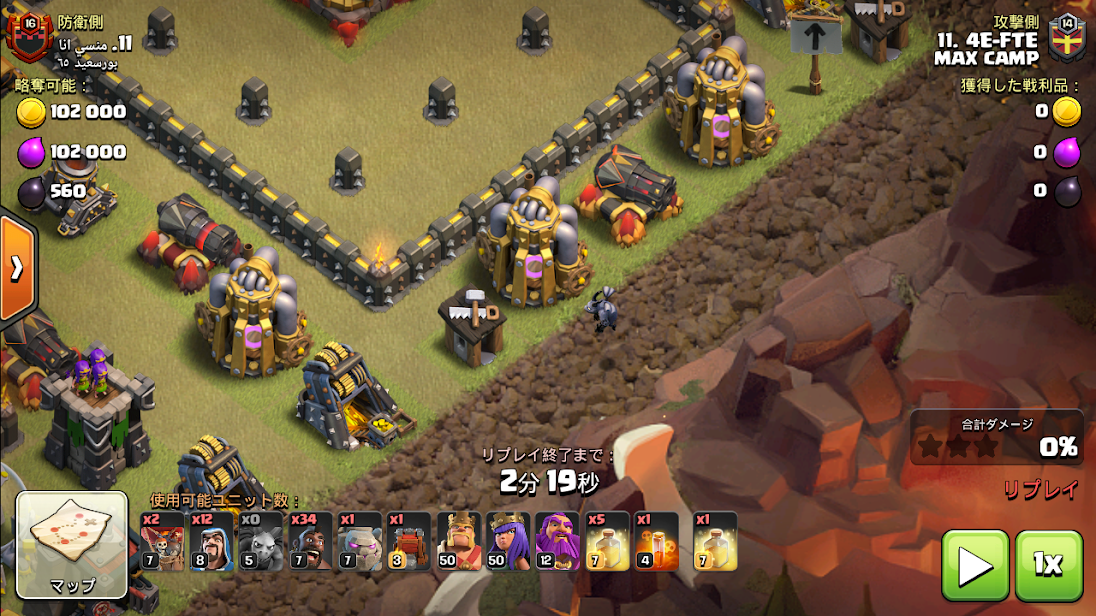 When I actually attacked, I wanted to destroy the elixir pump under it. Then the start position was bad and the minion attacked the carpentry hut next to it. 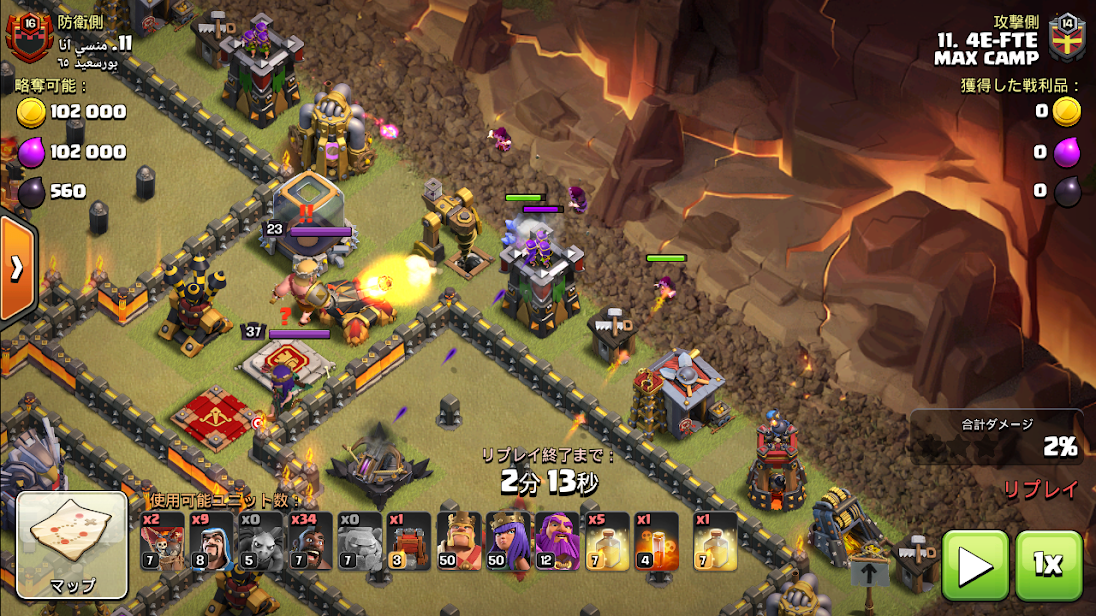 In Golem I am collecting targets from Archer Tower, Cannon and X-bow. The rightmost archer is being attacked. This is a reflection of the lack of confirmation of the attack range and the planning of the location of the wizard. 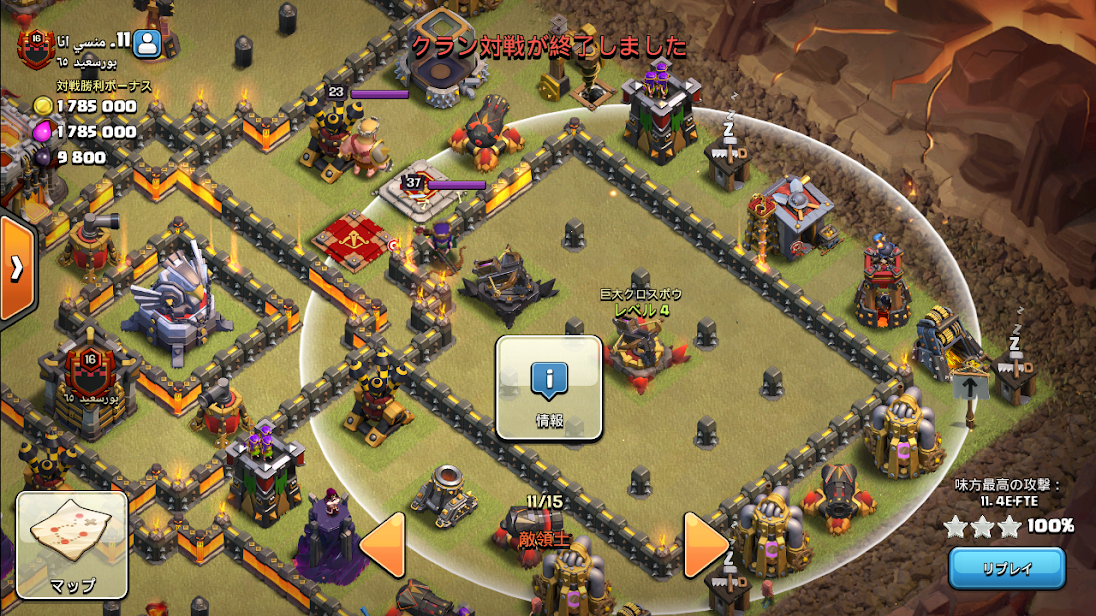 Actually, the level 4 X-bow will attack in this range, so the position of the wizard just before was bad. 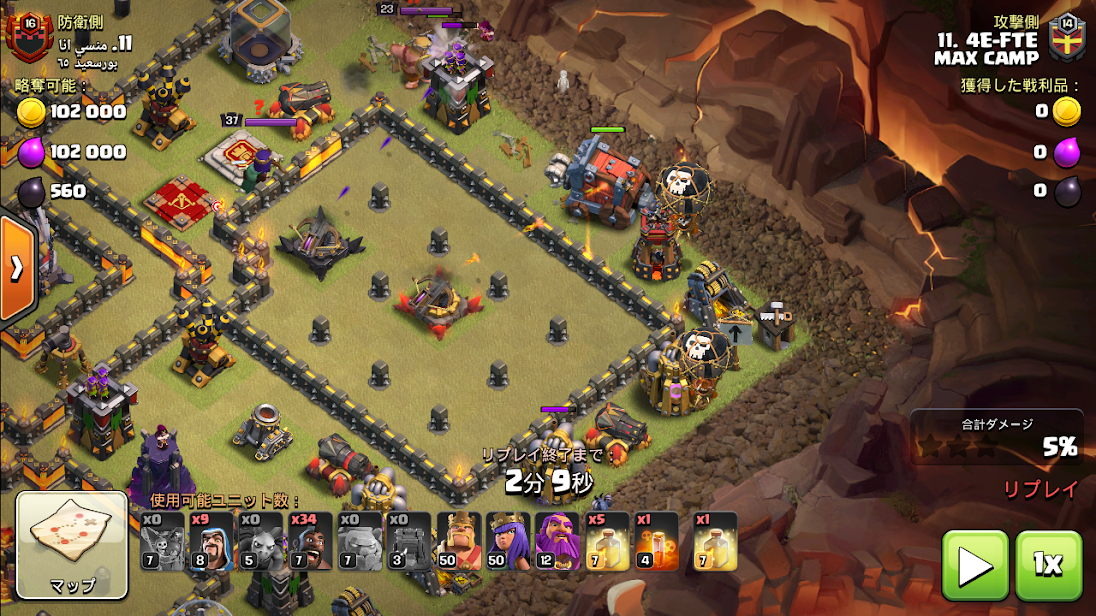 Then I took the level 4 X-bow target with Wall Buster and dropped two balloons as planned. 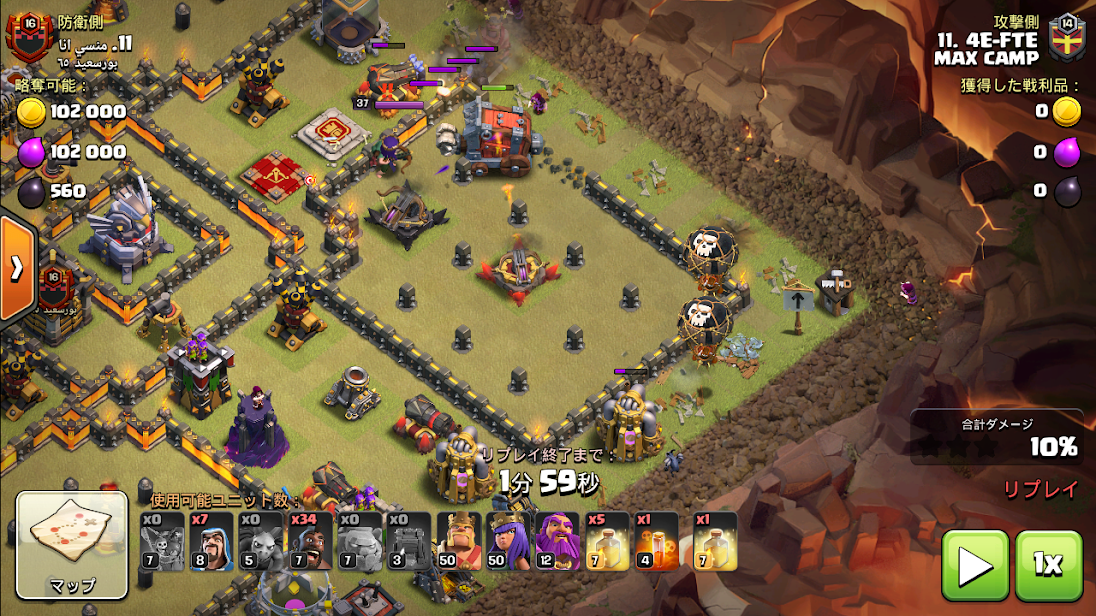 A wizard was put in at 3 o’clock when the Bomb Tower and cannon were destroyed. If the carpenter’s hut breaks, the invasion units will not move sideways.

Please take a look at the replay when I actually attacked.

Let’s look at a failure example. The enemy placement is as follows. 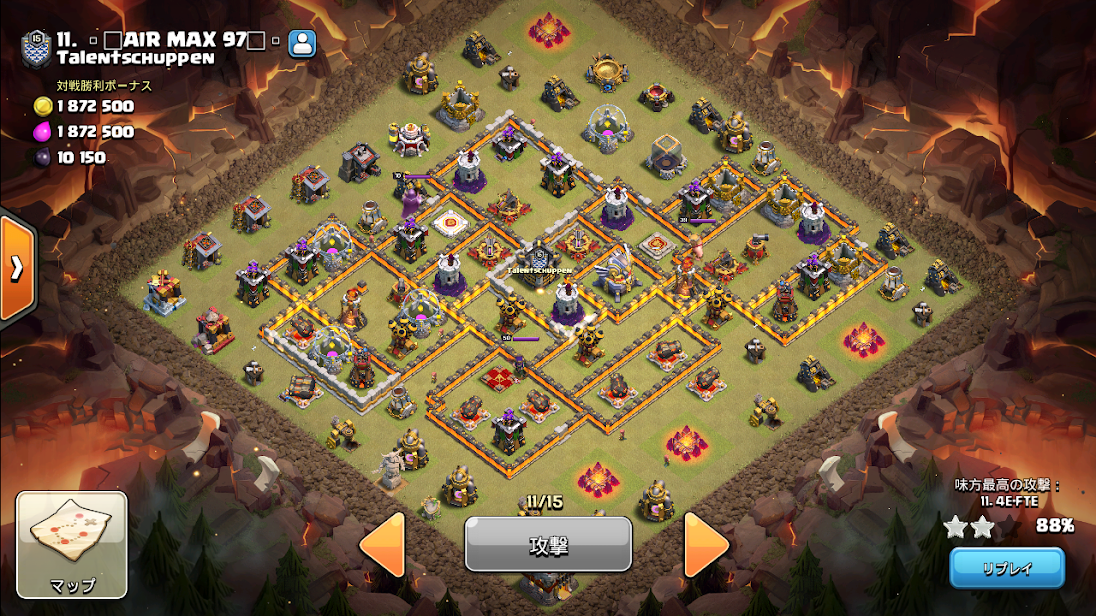 I thought it was impossible to plan this placement. There is a town hall at 6 o’clock at the bottom, but it is impossible to make a plan to deal with reinforcements and AQ as Wall Buster heads there.

Well, this time I decided to attack with the following organization.

As a strategy, I prepared a lot of hogriders and extended the life with a healing where AQ was.

AQ will remain at the end, but many hogriderss will destroy the remaining facilities at 9 o’clock, and finally AQ and the altar will be destroyed.

Then, below, I will explain the points focusing on the image that I attacked before watching the video. 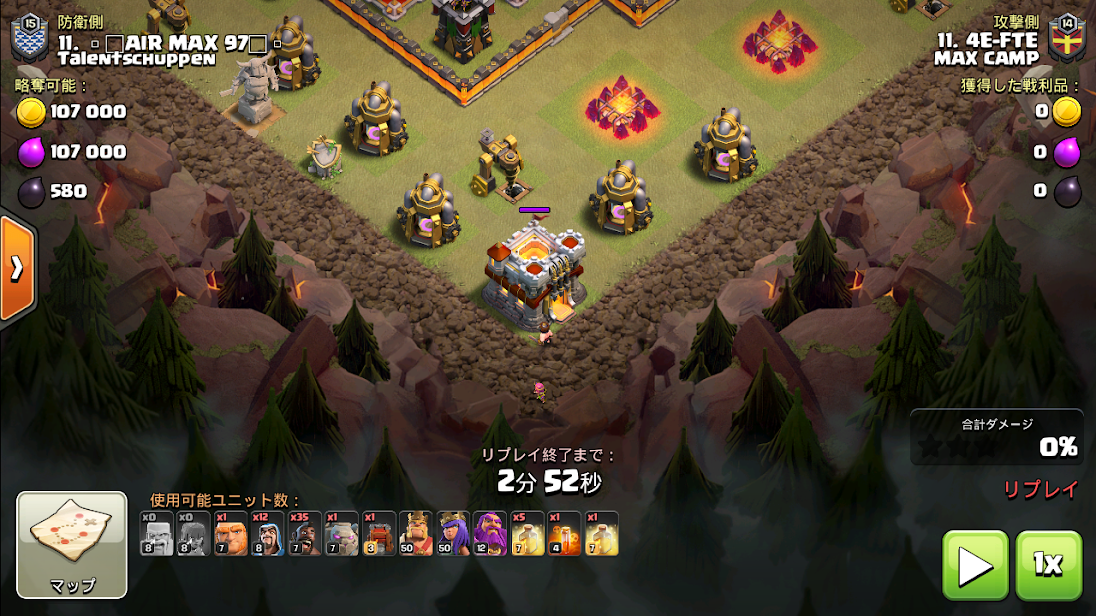 First, the Archer was introduced directly under the town hall. I thought Tesla would come out, but it didn’t actually come out. 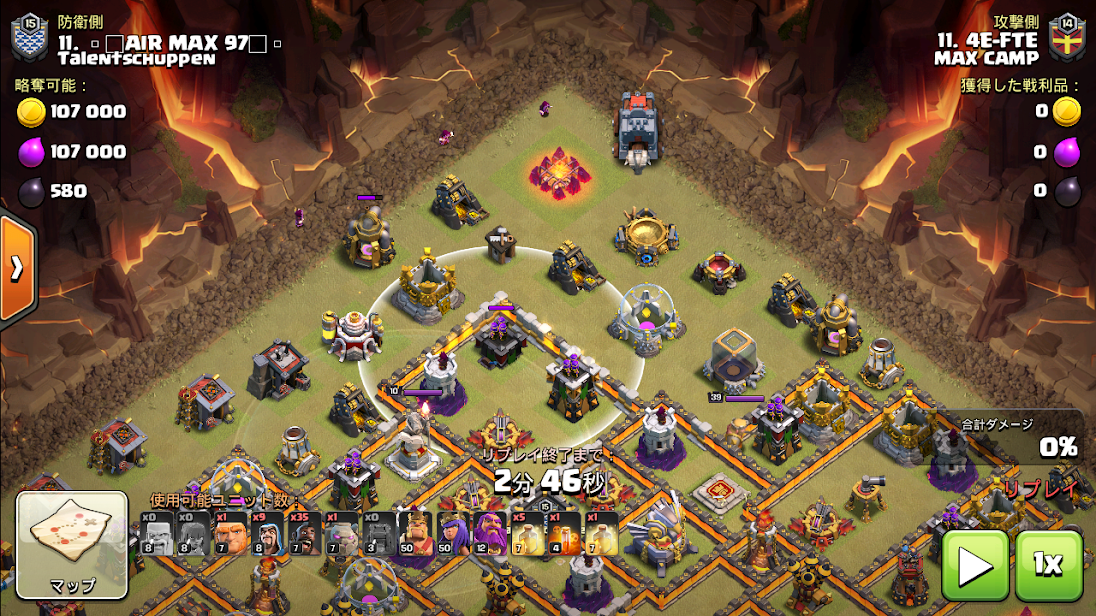 There is an Archer Tower for short distance designation. Thanks to this, the wizards break the elixir pump, golden moutain, and safe. 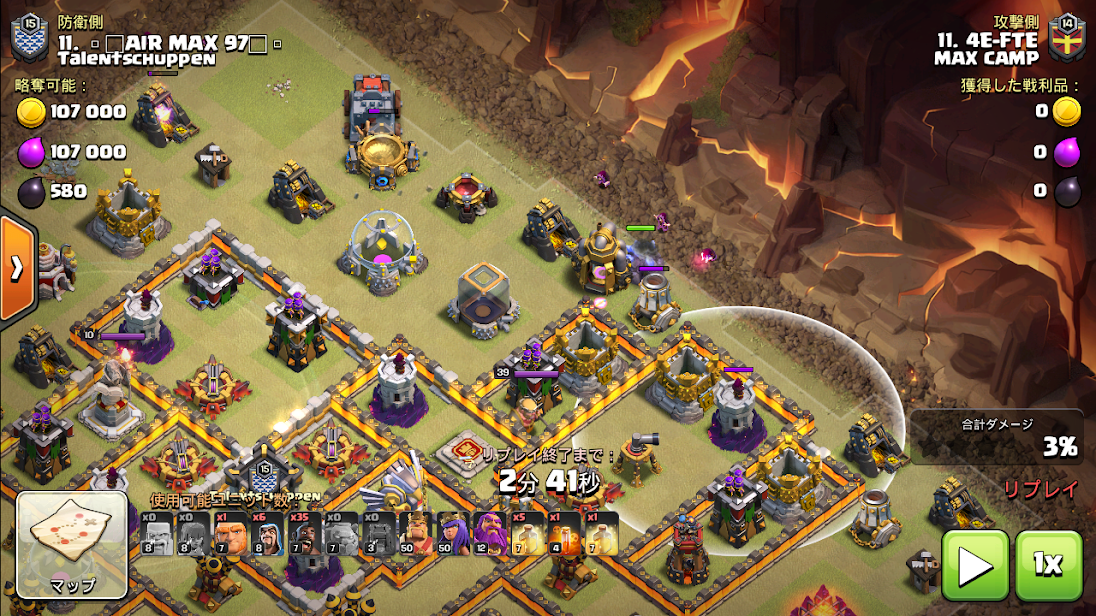 Three rear guard wizards are introduced in the back while collecting targets in the golem.

I feel a bit early, but I have introduced AQ. 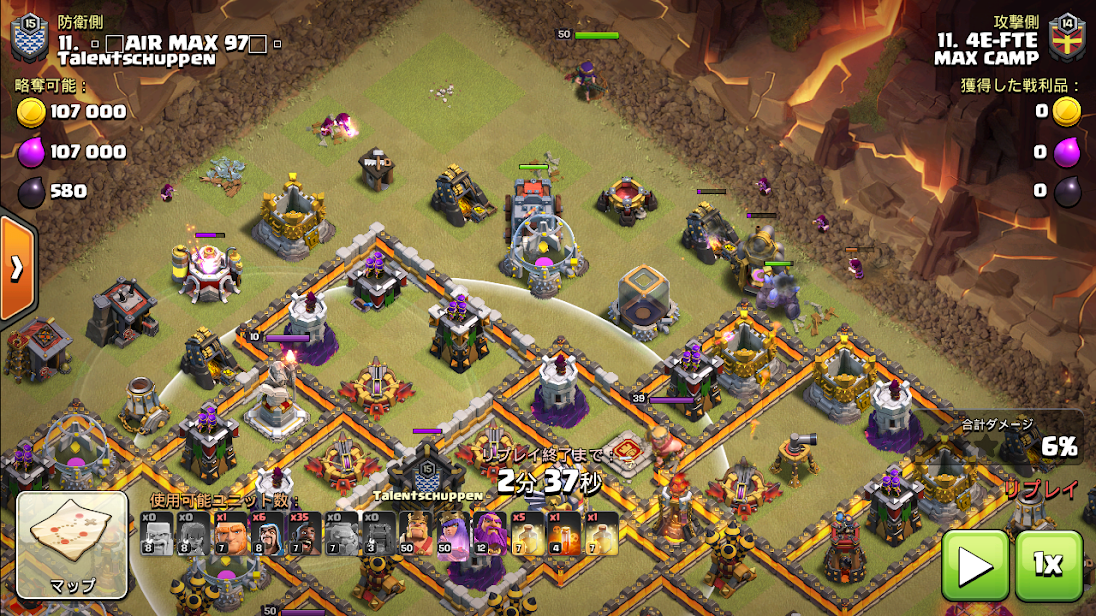 Care must be taken that the Golem and the WW do not lead too far ahead of the vanguard destroyer. There are elixir and dark elixir tanks. If something with such a high HP comes off, be careful for golem or WW not to go alone. 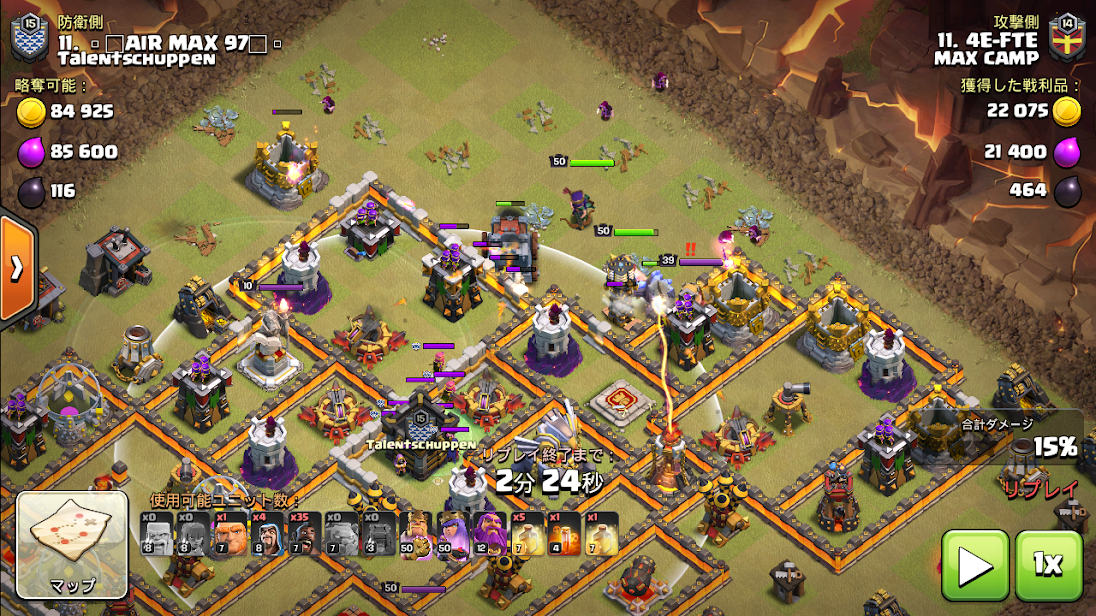 Added additional BK and wizards. I haven’t issued Warden yet. 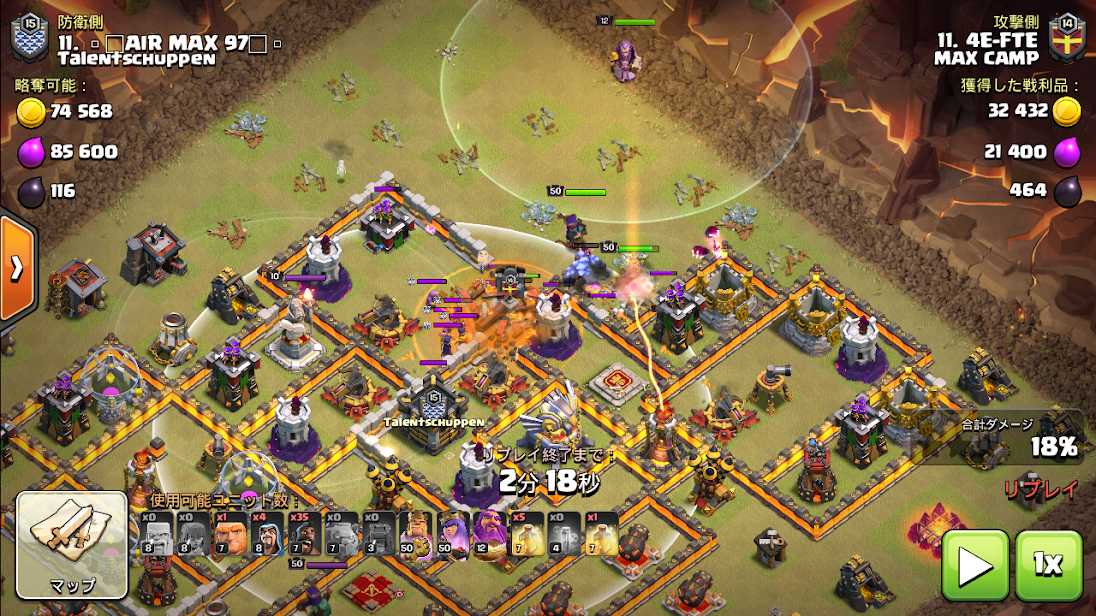 I finally put out Warden. It was late. Bad. 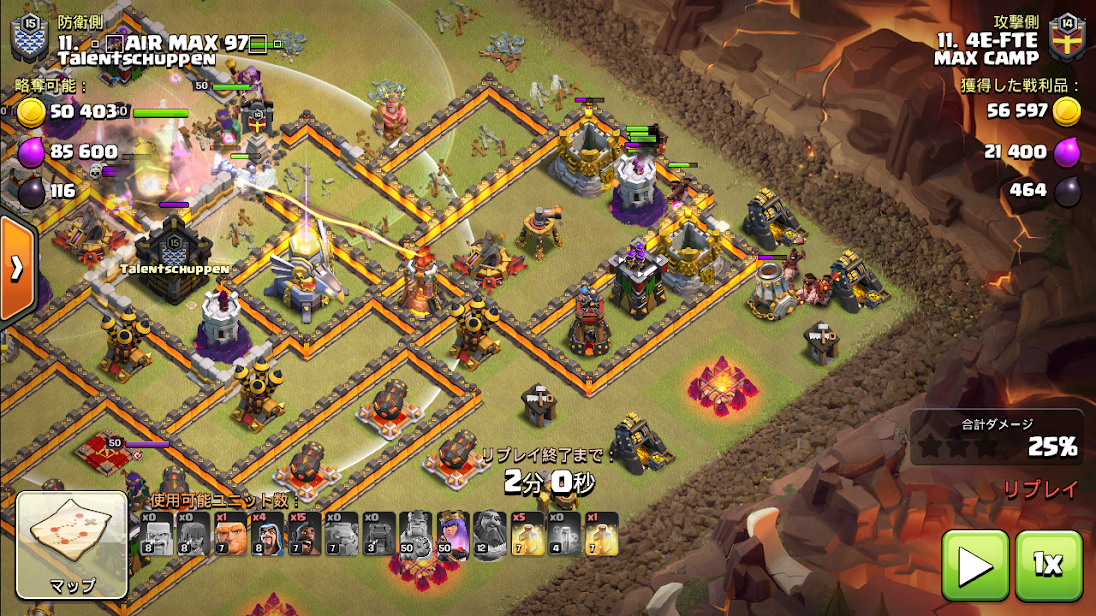 First, the hogs are thrown in from 3 o’clock. Usually, about 20 hogs are introduced as main units. The rest is added to the protruding part of the enemy defense facility to prevent the hogs from spreading. 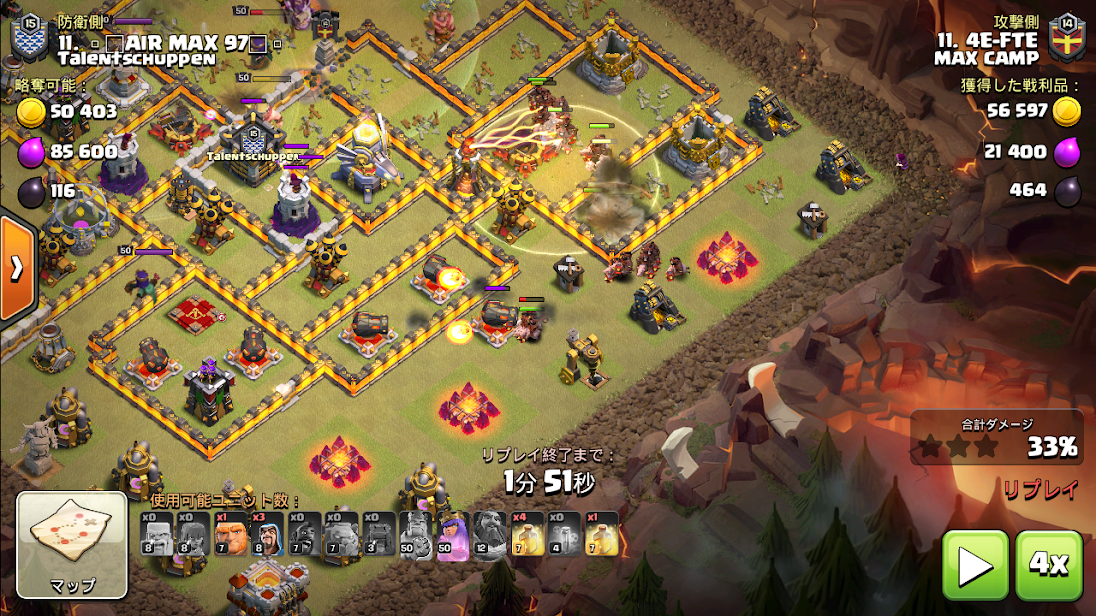 Next, an additional hogs were introduced for the slightly protruding 4 o’clock cannon.

All hogs dropped. I goofed. This was a big failure. The additional hogs should have been about six or seven.

Giant was introduced aiming at the block where AQ is located. 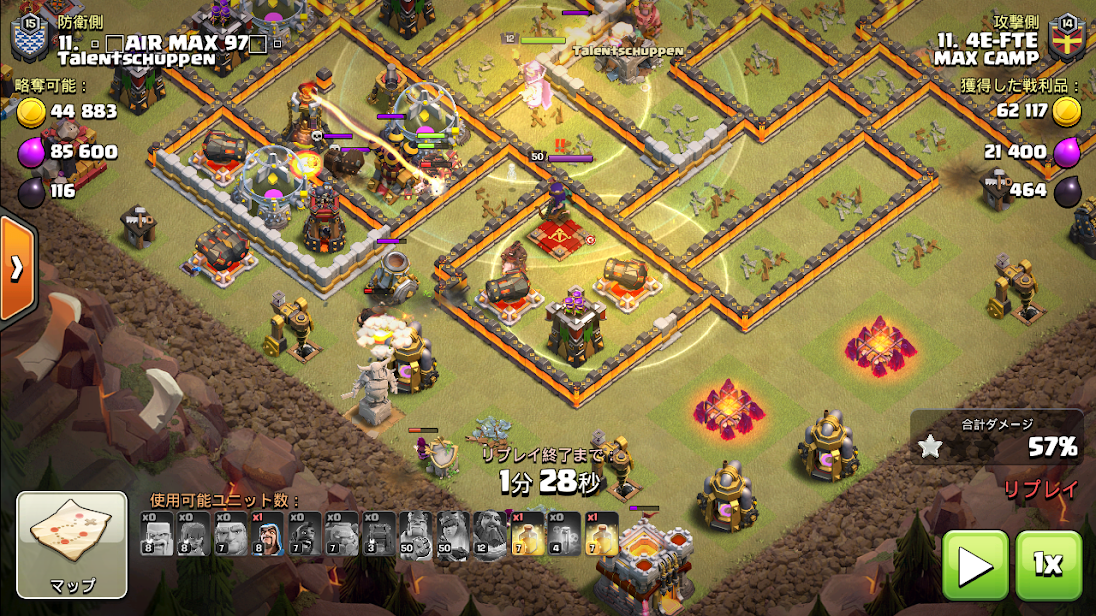 A giant is heading for a mortar. During this time, six hogs should be thrown into this area to destroy them, but the hogs have been left out, so they did not remain. Bad.

The hogs have reached 9 o’clock. 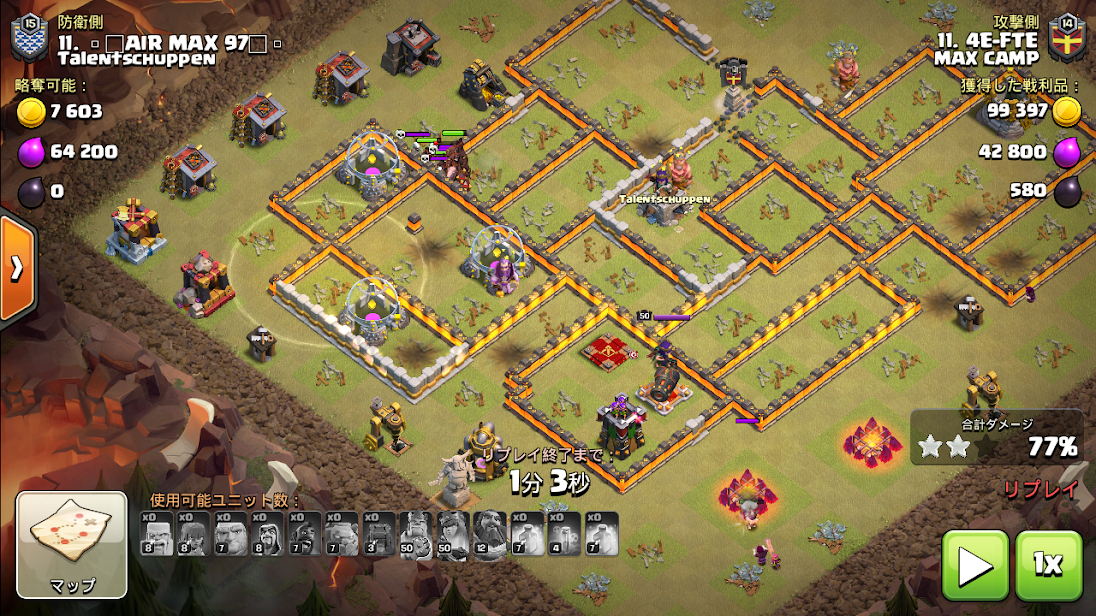 There are quite a few hogs left. If it was true, the remaining skeleton and the remaining facilities at 9 o’clock should have been destroyed. However, there are still artillery and archer towers in the AQ section, so hogs are heading for them. 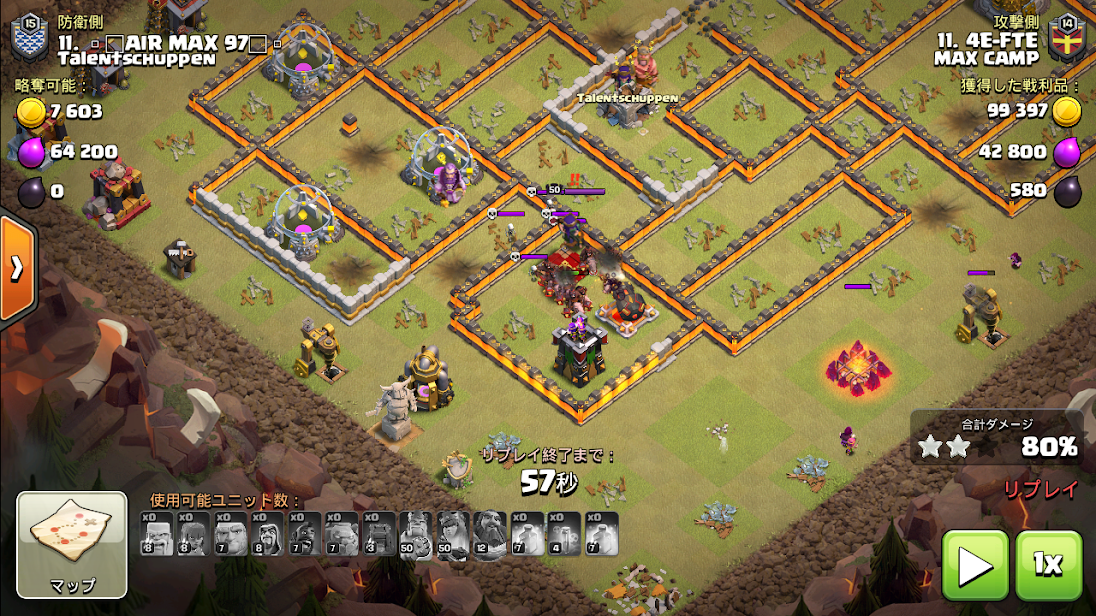 It may have been completely destroyed if one heel remained. In fact, hogs were dropped one after another. Failed.

How was this article? See you!